View cart “RAW Sainfoin White Honey” has been added to your cart.
Previous 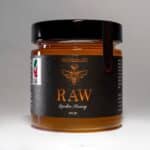 Taste – The distinctive taste and fragrance are attributed to the nectar of the flowers of the Sidr tree, which has butterscotch and caramel notes and the soil the tree grows from in Yemen.

You can find Sidr trees in other parts of the world but it is Raw Yemeni Sidr honey that is known to be the best (and most expensive) in the world. It is often compared to New Zealand’s Manuka honey as it too carries many medicinal and health benefits. We only work with beekeepers who do everything by hand preserving its vital live nutrients that not only give us its special flavour but retain its healing properties too.

Raw Sidr Do’ani is considered as the most expensive honey in the world, not only because its numerous health benefits but also because of the remote area where this tree is located.

We aim to bring you the best quality honey from around the world. We carefully choose our partner beekeepers, who follow ethical and good practices of taking care of the bees and extracting the honey. Every batch is tested in our certified laboratories in Bulgaria. All of our honey varieties are single-origin, unfiltered and unprocessed.

Storage Info: Store at room temperature away from direct sunlight.

*we love Nature, so please consider recycling your jars*